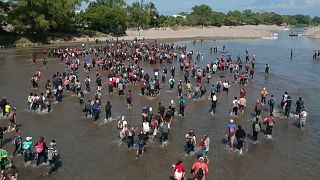 Hundreds of Central American migrants waded across the Suchiate River into southern Mexico from Guatemala on Monday in a new test of US President Donald Trump's Central America strategy to keep them away from the US border.

Some scuffled with national guardsmen on the riverbank while others slipped through Mexican lines and trudged off on a rural highway in small groups.

Immigration authorities nabbed more there and chased others into the brush.

Most, however, remained at the river's edge or stood in its muddy waters trying to decide what to do next, after being blocked from crossing en masse over the border bridge leading to Ciudad Hidalgo.

Mexico's strategy, developed after the first migrant caravan in late 2018, to break up the mass of people repeatedly and into increasingly smaller groups appeared to be working.

Over the weekend, government officials convinced about 1,000 people they should enter legally over the border bridge.

On Monday, migrants were detained at the river and along the highway.

Those who continued could expect a gauntlet of highway checkpoints while trying to move north.

After the river crossing Monday, Mexico's National Immigration Institute issued a statement saying that it would detain any migrants without legal status, hold them in detention centres and deport those who did not legalise their status.