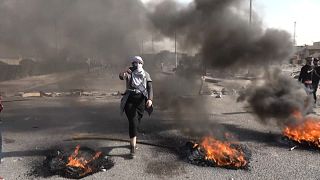 Iraqi security forces fired tear gas and live rounds during the clashes while protesters threw Molotov bombs at them.

Three demonstrators were killed and dozens wounded in Baghdad on Monday, officials said.

The uprising began on October 1 when thousands of Iraqis took to the streets to decry rampant government corruption, poor public services and a scarcity of jobs.

Protesters are demanding an end to Iraq's sectarian political system, alongside early elections and the stepping aside of its ruling elite.

The anti-government movement had scored several successes before the US strike diverted public attention.

Later that month, lawmakers passed a key new electoral law that would give voters more say in who's elected to office.

But bickering between rival political factions has set back talks over the selection of a new premier.

Since the protests first erupted in October, at least 500 have died under fire from security forces.