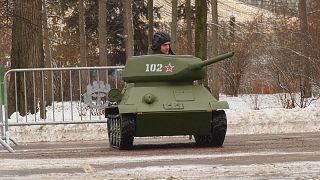 This is not a toy, but at the same time it's not quite a real Armoured Personal Carrier.

Thanks to a tankodrome that opened in Sokolniki Park in Moscow, people can simulate the experience of being in a real APC.

At a very quick glance you might think this is an exact replica of the legendary Soviet T-34 APC from the Second World War.

However, if you look closer, there are differences that meticulous model-makers would quickly notice.

According to the creators of the machines, the APCs were designed to be fun activity carts.

The goal was to make them look and operate as much as possible as the real APCs, but they've also been built to be comfortable enough to sit inside as well as safe and easy to drive.

The APCs run on ordinary gasoline.

At the heart of it is an internal combustion engine of 620 cubic metres, with 21 horsepower.