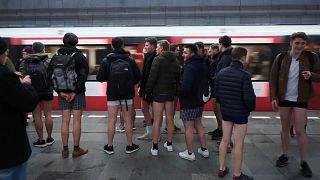 New Yorkers dropped their trousers to take part in the 19th edition of "No Pants Subway Ride".

On a brisk January morning, the annual event - started in 2002 by Improv Everywhere in New York - was echoed in Prague, where 35 passengers in the Czech capital took part.

According to the organisers, the purpose of the event is to make other passengers pay attention to others on their ride to work.

"We want them to look around instead of only watching their cell phones," said organiser Pavel Majtan.

Trouser-less riders also appeared in other cities around the world, including London.