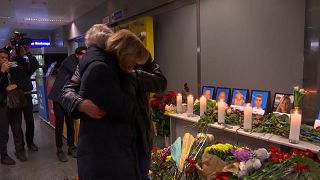 Ukraine International Airlines (UIA) staff have paid tribute to colleagues killed when one of the airline's planes crashed in Iran.

They held a vigil in Kyiv's Boryspil Airport for the nine crew members killed in the crash, along with 167 other passengers.

The plane went down after taking off from Tehran airport in the early hours of Wednesday.

It happened just hours after Iran carried out missile attacks on Iraqi bases housing US soldiers, but Iranian officials said they suspected a mechanical issue brought down the three-and-a-half-year-old Boeing 737-800 aircraft.