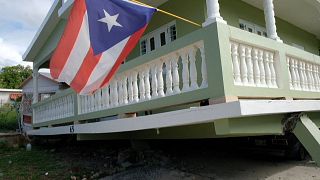 A 5.8 magnitude quake on Monday toppled some structures, caused power outages and small landslides, but did not result in any casualties.

It also destroyed a popular tourist landmark, Punta Ventana, a natural stone arch that crumbled on the island's southern coast.

Vazquez, the governor, said government employees were being given the day off on Tuesday to take care of their families.

"We want everyone to be safe," she said.

"Obviously we all have all of our assets out in the street in the areas with major damage," Vazquez added.

She said ports were undamaged and there are several weeks of gasoline, diesel and natural gas stored so people need not worry about shortages.

The White House said President Donald Trump had been briefed and Pete Gaynor, head of the Federal Emergency Management Agency (FEMA), had been in touch with the governor.

Trump has been accused by some Puerto Ricans of failing to provide the island with adequate assistance following Hurricane Maria in 2017.