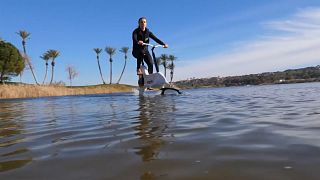 This e-Bike can ride on water

We may never walk on water, but now we can cycle.

The Manta5 Hydrofoiler XE-1 has pedals, an electric engine and a battery, very much like an e-bike. But it also has carbon fibre wings called foils, that allows the whole bike to plane on top of the water at a speed of up to 12 miles per hour (20 kilometres per hour).

"It uses e-bike technology to assist you as you are planing along the surface. And then underneath the water, you've hydrofoils and a propeller which gives you the lift and thrust to be able to plane on the surface of the water. We set out to replicate the cycling experience on water."

The 460-watt electric motor is powered by a battery that lasts for a full hour of water cycling.

The company decided to add the electric engine to allow people to use the bike for longer distances, for example from a yacht to the shore.

"So for the first five years of research and development, it was all manual. But we wanted to extend the ride time and open the market to a wider pull of people. So our first product is XE-1 which allows for electric technology to be able to assist you as you are riding, very much like an e-bike," says Johnston.

The New Zealand-based company was founded in 2011 and unveiled its first prototype of hydrofoil bike in 2017.

About 30 XE-1 bikes have been sold to early backers in New Zealand and the company is hoping to make the bike available globally in 2020.

It is currently available for pre-order for $7495 US dollars.

More than 170 000 people are expected to the annual show, held across a sprawling set of hotels and convention centres equivalent to more than 50 football fields.