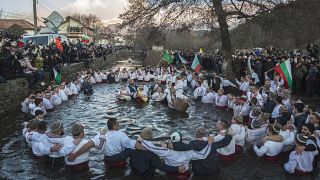 Hundreds of people gathered in the central Bulgarian town of Kalofer on Monday to mark the Epiphany with a dance in the Tundzha river's ice-cold waters. Only men enter the river for a ritual believed to bring good health for them and their families.

In Istanbul's Golden Horn, Greek Orthodox men have to dive for a cross.

Orthodox worshippers defied the pouring rain and ice-cold waters as they dived into the Golden Horn to retrieve a wooden cross thrown by The Ecumenical Patriarch Bartholomew of Constantinople after the Epiphany mass.

By tradition, the person who retrieves the wooden cross will be freed from evil spirits and will be healthy throughout the year.

After the cross is fished out, the priest sprinkles believers with water using a bunch of basil.

The Patriarchate in Istanbul is considered the heart of the Orthodox world and dates back to the Byzantine Empire, which collapsed when the Muslim Ottomans conquered the city in 1453.

The Greeks also plunge into cold water to celebrate Epiphany

Greeks brave cold weather and plunge into the sea to retrieve a wooden cross during the traditional blessing of watermarking the Orthodox Epiphany Day in Athens.