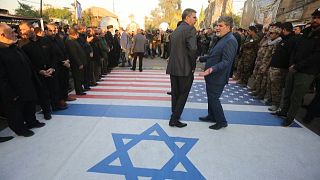 Iranians clutching anti-American signs and portraits of their hero Qasem Soleimani massed as supreme leader Ayatollah Ali Khamenei presided over the emotional service for the slain head of the Revolutionary Guards' Quds Force.

The targeted killing of 62-year-old Soleimani ordered by US President Donald Trump has seen the Islamic republic vow "severe revenge" before Tehran also took a further step back from the already tattered 2015 nuclear accord with world powers.

In an escalating war of words that has heightened international concern and rattled financial markets, Trump threatened yet more "major retaliation" if Tehran hits back, including strikes on Iranian cultural sites.

Iraq's parliament has meanwhile demanded the government expel the 5,200 American troops stationed in the country in response to the drone attack in Baghdad which also killed top Iraqi military figure Abu Mahdi al-Muhandis.

Trump has warned a forced departure of US troops would prompt sanctions against Iraq that would "make Iranian sanctions look somewhat tame".

NATO ambassadors were to hold an extraordinary meeting to "address the situation in the region," said the alliance, which has been forced to suspend its training mission in Iraq.

Ambassadors from the 29 allies were gathering at their Brussels headquarters with Secretary-General Jens Stoltenberg expected to brief journalists afterwards.