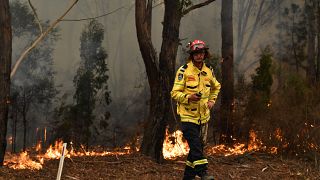 Heavy smoke from bushfires obscured view of Australian Air Force teams working to provide assistance to rescue and relief operations over the weekend.

Cockpit footage released on Monday, January 6, shows aircraft surrounded by a thick orange haze. The pilots managed to land and conduct evacuation flights over the weekend.

Residents of the New South Wales town of Batlow were assessing the damage to their once bucolic town, during a respite in heat that has fueled historic bushfires across Australia.

Logs smouldered next to grisly carcasses of livestock amid an orange haze from ash.

The wildfires have so far scorched an area twice the size of the U.S. state of Maryland. They have killed at least 24 people and destroyed about 2,000 homes.

More than 135 bushfires were still burning across New South Wales, Australia's most populated state, including almost 70 that were uncontained.

A police officer offered a helping hand to a thirsty kangaroo wandering in Bendalong, a town on the south coast of New South Wales. A video published on January 6 shows the police officer pouring water from a plastic bottle onto his hand, as the marsupial approached and took a few sips of water.