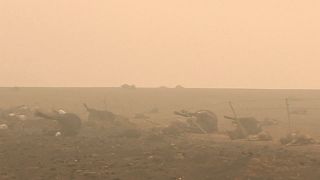 Grisly images from New South Wales show charred remains of animals covering the roadside in Batlow where earlier a man had died defending his property from the out of control bushfires.

There were just under 150 bushfires burning in NSW on Sunday morning, with emergency warnings issued for blazes in the southern highlands and on the south coast near the NSW-Victoria border.

A captain for the state's Rural Fire Services said teams undertook a form of emergency "triage" to deal with the unprecedented blaze.