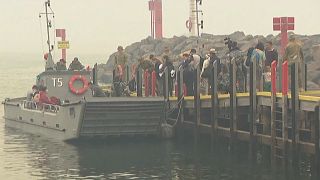 One of the largest evacuations in Australia's history was underway on Friday ahead of hot weather and strong winds that are forecast to worsen devastating wildfires raging across the country.

More than 200 fires were burning, and warnings of extreme danger to come Saturday prompted mass evacuations.

Navy ships were called in to pluck hundreds of people stranded on beaches.

The navy evacuated hundreds from Mallacoota, a coastal town in Victoria cut off for days by wildfires that forced as many as 4,000 residents and tourists to shelter on beaches.

Choules Commander Scott Houlihan said 963 people had signed up for evacuation by sea and more had been airlifted to safety.

The early and devastating start to Australia's summer wildfires has made this season the worst on record.

About 5 million hectares (12.35 million acres) of land have burned, at least 19 people have been killed, and more than 1,400 homes have been destroyed.

This week, at least 448 homes have been destroyed on New South Wales' southern coast and dozens were burned in Victoria.

Ten deaths have been confirmed in the two states this week, and Victoria authorities also say 28 people are missing.