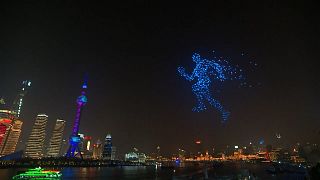 Drone show as Shanghai welcomes in the new year

At night, the drones took off by the Huangpu River. They formed various patterns, ranging from the Earth to a dragon.

At around midnight, the drones gathered to become a running man.