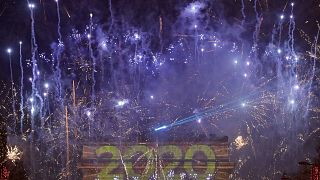 Fireworks as the new decade sweeps in across Europe

Fireworks lit up the night sky as the new year swept in across Europe's time zones.

Moscow welcomed in 2020 with a display on the banks of the Moskva River, before skies over the Acropolis in Athens were illuminated.

Then landmarks such as Berlin's Brandenburg Gate and Paris' Arc de Triomphe were the focus as the German and French capitals partied.

In London, a pyrotechnic extravaganza was launched from the London Eye big wheel and from barges on the river, near the Houses of Parliament.