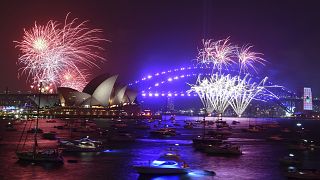 More than a million people descended onto a hazy Sydney Harbour and surrounding areas to greet 2020 despite the ongoing wildfire crisis ravaging New South Wales.

The first of two fireworks displays during the evening was delayed by 15 minutes due to strong winds but it didn't deter revellers from celebrating, providing the area with some desperately-needed cheer.

New South Wales has copped the brunt of the wildfire damage, which has razed more than 1,000 homes nationwide and killed 12 people in the past few months.