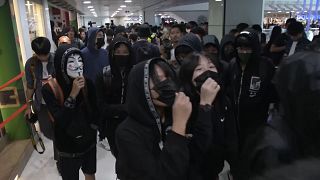 Police fought with protesters who marched through a Hong Kong shopping mall on Saturday, demanding mainland Chinese traders leave the territory in a fresh weekend of anti-government tension.

The protest in Sheung Shui, near Hong Kong's boundary with the mainland, was part of efforts to pressure the government by disrupting economic activity.

About 100 protesters marched through the mall shouting, “Liberate Hong Kong!” and “Return to the mainland!”

Police in civilian clothes with batons tackled and handcuffed some protesters.

Some shoppers argued with police in olive fatigues and helmets who blocked walkways in the mall.

Protests that began in June over a proposed extradition law have spread to include demands for more democracy and other grievances.