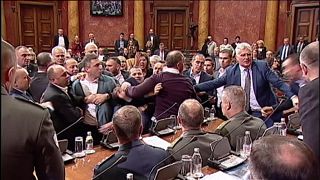 Parliament was hit with disturbances on Friday as lawmakers expressed their dissatisfaction with the failure of the Serbian authorities to react to the adoption of the Law on Religious Freedom in Montenegro.

Carrying banners reading, "Vucic and Milo - the twin brothers" and "Serbia, why are you silent?", Obradovic and Kostic took the stand and asked ruling coalition MPs why they weren't reacting to the adoption of the Law on Religious Freedom in Montenegro and the arrest of Democratic Front deputies.

The legislation will force religious communities to provide a register of everything they own as well as evidence of ownership from before 1918 — when Montenegro joined a Serb-led Balkan kingdom and lost its independence — in order to retain their property.

It was approved by 45 ruling coalition lawmakers.