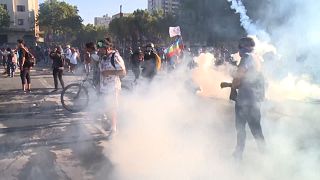 Protesters clashed with police in the streets of Santiago on Friday, as Chile marked a second full month of unprecedented social revolt.

Thousands have been injured in clashes with police, who have fired pellet guns at protesters, leaving at least 300 people with severe eye injuries.

Twenty-six people have died in protests that began October 18 over an increase in subway fares in Santiago, and mushroomed into wide-ranging complaints about much deeper issues of inequality.

Some 2,210 police have been reported injured during the protests and 188 police stations along with 971 police vehicles have been damaged.

The Office of the UN High Commissioner for Human Rights recently released a report based on a three-week fact finding mission to Chile concluding that police and army committed "serious human rights violations" against protesters.