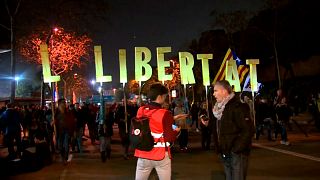 Barcelona and Real Madrid football teams could not be separated on Wednesday in a 0-0 'Clasico' that was overshadowed by violent clashes between Catalan independence protestors and police outside Nou Camp.

There were fears of unrest around the fixture, which had been postponed from October. While Spain's high-profile derby was only briefly interrupted by yellow beach balls thrown onto the pitch, there was chaos outside the stadium.

Masked protesters had set bins on fire and thrown rocks and glass bottles at police, who responded by firing foam bullets.

Twenty-one people were lightly injured in the clashes, including six who needed to be taken to a medical centre for extra care, local emergency services said. Two people were arrested, according to a police spokesman.

The protesters, many carrying Catalan separatist flags, began setting up barricades in the middle of the street which they then burned after police arrived.