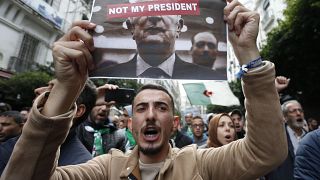 Tens of thousands of protesters took to the streets in Algeria after Abdelmadjid Tebboune, a former prime minister and loyalist of the influential army chief, was declared the oil-rich nation's new president in an election boycotted by members of the vibrant pro-democracy movement.

Protesters demanded a "free and democratic" Algeria and rejected the vote results, chanting no to the elections and denouncing suspected fraud.

Tebboune, 74, received 58.15% of the vote in the north African country, according to the head of the National Independent Electoral Authority, Mohamed Charfi.

Turnout was just 41%, reflecting the frustration of many Algerians who hoped to see new faces among the candidates.

Tebboune served briefly as prime minister in 2017 under ex-President Abdelaziz Bouteflika, who was ousted in April by peaceful protests that have been called Algeria’s Arab Spring.

The election of Tebboune, an establishment figure, disappointed protesters who believe the poll was rigged in favour of the old regime.

Tebboune is reportedly close to powerful army chief Gaid Salah, a much-criticised figure among members of the protest movement that began in February.

Algeria is one of the most youthful countries in the world, with two-thirds of the population under 30.

A quarter of the youth is out of work, leading to discontent with the country’s veteran rulers and the opaque policies that have left them behind.