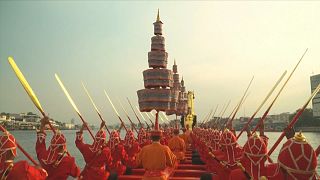 Royal ceremony held with more than 52 ships in Thailand

The authorities have reserved at least 6 places enough for the presence of up to 10700 people along the banks of the river, while dozens of temples, schools and private properties have opened their doors for the special event.

The ceremony was broadcast on television throughout the country. Viewers flocked from six in the morning to find the best place to watch, according to Thai television networks.

The ceremony is a sample of Thai royal traditions and a veneration of property. Most Thai spectators wore yellow shirts, as requested by the government, the colour that represents the king. Free transportation and food were also provided.

The 67-year-old king assumed the throne after his father's death in 2016, and most of his actions were considered attempts to increase his influence on the country's management. The king revived a series of ancient traditions, such as the property of the king of public goods and sought direct control of some important military units, as well as the dominant entity of Buddhist monks.