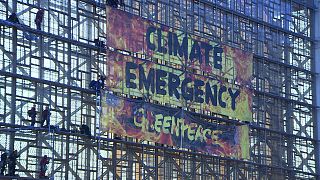 Around 30 environmental activists scaled the new European Union headquarters in Brussels on Thursday to unfurl a banner warning of a "climate emergency" ahead of a meeting of the bloc's leaders later in the day.

The activists from the Greenpeace NGO also fired some red flares in what looked like an attempt to make it looks like it is burning.

Several member states including Poland, Hungary and the Czech Republic have already voiced their opposition to some of the plans, warning of the high cost of adapting the economy to reach the target.