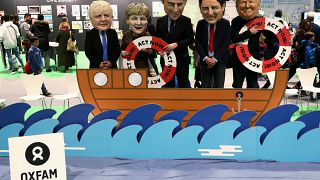 A group of a dozen protesters gathered outside the COP25 climate conference on Tuesday to call on Japan to abandon coal-fired power plants.

Coal remains the cheapest fuel source for Japanese utilities as long-term contracts for cleaner-burning liquefied natural gas (LNG) have risen this year since they are tied to the price of crude oil.

Also starring inside the event, big-headed caricatures of Donald Trump, Boris Johnson, Justin Trudeau, Angela Merkel and Emmanuel Macron were crammed into a flimsy raft, with the display showing sea levels rising around them due to climate change.