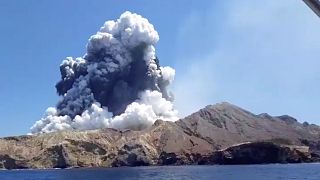 A couple, Aline Moura and Allessandro Kauffmann, filmed the eruption just minutes after they had left the island by boat, they said in a post on Instagram.

Moura said the boat turned back to rescue those left on the island, but she was not sure if everyone got out alive. She added that people on board suffered burns.

Police said more casualties were feared with rescue services unable to reach White Island, off New Zealand's North Island, as it remained too dangerous after the eruption which had spewed a plume of ash thousands of feet into the air.

About 50 people, New Zealanders as well as foreign tourists, were feared to have been nearby and several were seen near the rim of the crater minutes before the blast.

Tourists visit the island regularly, and a tour from the Ovation of the Seas cruise liner was there at the time.