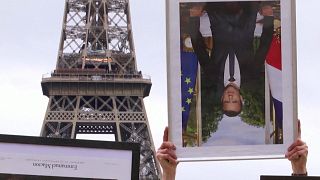 A group of activists have stolen more than 130 portraits of Macron from town halls across France. Activists are facing trials around France, with some acquitted and others fined.

Activists brought the portraits to Sunday's protest and carried them upside down as a metaphor for what they say is the president's hypocrisy.

The protest comes during the UN's climate conference in Madrid. They held 100 portraits to mark 100 days before France's local elections.

Activists are angry that France has lagged on its international commitments to increase renewable energies.