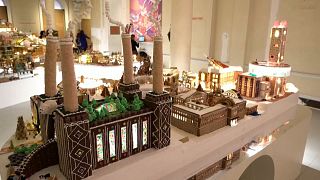 Architects in London have traded in the usual concrete and wood for biscuits and dough in order to create The Gingerbread City - a futuristic city made of edible treats.

The annual exhibition, which was unveiled on Thursday and put together by the Museum of Architecture, showcases a final project by architects, designers and engineers who were asked to create a sustainable and inclusive city of the future.

The exhibition opens to the public on Saturday and runs until January 5, 2020.