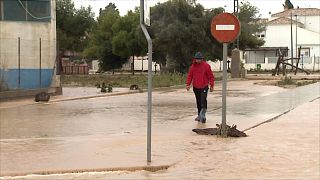 Dozens rescued from their homes after severe floods inundate Spain

Around a hundred people have been evacuated and dozens more rescued from their homes after severe flooding hit parts of the Murcia region of Spain.

The community of San Javier, one of the worst affected areas, registered 126 litres of floodwaters per square metre in less than two hours and led to 40 people being rescued from their homes and stranded vehicles.

It is part of the latest "Gota Fria" phenomenon, which literally translates to "cold drop" in English, and refers to severe rainfall during autumn.

In the last 20 years, nearly half a million deaths have been directly linked to more than 12,000 extreme weather events worldwide, while economic damages have exceeded €3.15 trillion.