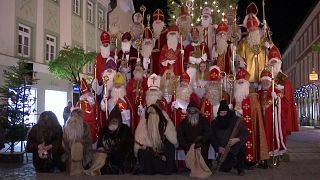 Some 70 Santa Clauses and their helpers Krampus, Perchten and angels gathered in the southern Bavarian town of Murnau on November 30 in order to parade through town in full regalia to get everybody in the mood for the Christmas season.

The aim was to be mentioned again in the Guinness Book of Records - as they were last year - and to stand up against the commercialisation of the religious festival.

"The faith is the beautiful and special thing about it and I want to represent it," said Santa Claus Joseph Meiler. "And Santa Claus is a saint after all. And he is always there for the children. And we must no let the faith die."

The gathering of the Santa Clauses in Murnau started some 40 years ago, with some Santas from the area meeting up after the 'assignment' for a beer. That gave chief Santa Reinhard Klein the idea to make it public and soon Santas gathered for a parade through Murnau. Last year, Klein's efforts were honoured with an entry in the Guinness Book of Records with a world record for most Santa gathered in one place.

At the same time, Klein calls for a protest against the commercial Father Christmas. He is solely an advertising character and he makes the holiday a consumerism one, so he said.

But it's not about records or medals. It's all for the children, as one of the Santa said: "This is great fun, seeing those sparkling children's eyes."