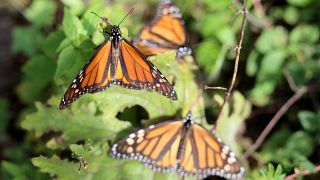 Thousands of striking orange and black monarch butterflies have begun arriving at their winter home in central Mexico for their annual migration.

The 3,000-mile (4,800-km) mass migration of monarch butterflies in North America is one of the insect world's fantastic feats, with millions embarking on the arduous journey from as far north as Canada down into Mexico and the California coast each autumn.

The number of migrating monarchs has been under strain in recent years. Experts said while an estimated one billion monarch butterflies migrated to Mexico in 1996, that number stood at about 35 million last year. Threats to them include habitat loss due to human activities, pesticides and climate change, experts say.

But so far this year, officials say numbers have been positive.

Population losses suffered by the charismatic butterfly stem from the destruction of milkweed plants they depend on to lay their eggs and nourish hatching larvae. The plant's decline is tied to factors such as increased cultivation of crops genetically engineered to withstand herbicides that kill native vegetation like milkweed, conservationists say.

Experts hope conservation measures will secure yearly population numbers of more than 225 million of the Monarch butterflies to Mexico.