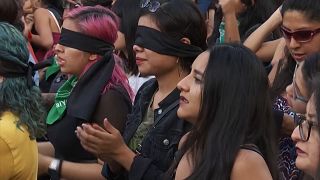 Thousands of activists staged a demonstration in Mexico City in protest of violence against women.

The activists were seen wearing blindfolds and chanting the phrase, "A rapist in your way," whilst performing a dance routine that originated in Chile.

Activist Constanza said the original performers in Chile shared the lyrics and the music with them and that the performance was "pretty easy to replicate".

It has also been replicated in other countries, including Spain, France and the United States.

Mariela, who participated in the march, said that the chant resonates not only in Chile but "all over Latin America, and the world" because violence against women "happens everywhere."

"In Mexico, it hits harder because its a violent country with the most femicides," she added.

The protest was organised in Mexico by 'Marea Verde', a feminist organisation, and quickly gathered momentum, summoning thousands of women to join the march against gender violence.