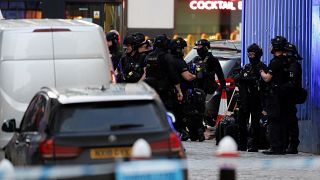 Suspect shot dead by police after attack near London Bridge

The suspect in what police are treating as a terrorist attack in London was shot dead by officers on Friday.

Several members of the public were injured in a stabbing incident near London Bridge, the Metropolitan Police said.

Footage shot by a passenger on a bus stopped on the bridge shows several people wrestling with a man on the ground and one man walking away holding a knife. An officer then takes aim at the man with what appears to be a gun and fires a shot.

Cars and buses on the busy bridge were at a standstill, with a white truck stopped diagonally across the lanes.

British Transport Police said London Bridge station, one of the city’s busiest rail hubs, was closed and trains were not stopping there.

People in buildings around the scene were evacuated to the north side of the River Thames by security services.