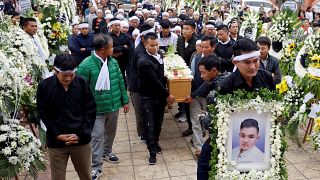 Two cousins — victims of a human trafficking tragedy discovered in Essex, England last month — have been buried in Vietnam.

They were among 39 Vietnamese people found dead in the back of a lorry.

The bodies of Nguyen Van Hung, 33 and Hoang Van Tiep, 18 were carried in a procession through the village of Dien Thinh ahead of the funeral.

After the service, mourners carried them to the local cemetery where the cousins were buried side by side.

The remains of 16 of the 39 Vietnamese found on October 23 east of London had been repatriated by Wednesday.

Funerals were held in nearby areas for several other victims.

The 31 men and eight women are believed to have paid human traffickers for their clandestine transit into England.

Police say the victims were aged between 15 and 44.

No cause of death has been officially established, though the circumstances suggested asphyxiation.

Several people suspected of involvement with the case have been arrested in the UK and Vietnam.