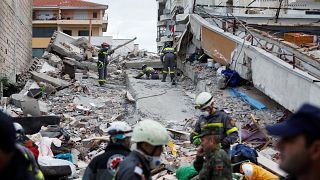 Dramatic footage released by rescue services in Albania shows a man being pulled out alive from under a collapsed building.

The man, named as Adriatik Bode in a social media post by the Mallakaster fire service, was pulled from under the rubble of the Mira Mae hotel in Durres, which was rocked by the 6.4-magnitude earthquake.

On Thursday, the death toll from Tuesday's earthquake stood at 40.

Spared by killer quakes since 1979, Albania lacks rescue know-how. Italy, Greece, Romania and others rushed teams in and they are searching for survivors as 530 aftershocks, some with a magnitude over 5, kept rocking buildings and scaring people.

The quake centred 30 km (19 miles) west of the capital Tirana, was felt across the Balkans and in the southern Italian region of Puglia across the Adriatic Sea.

The government has declared a state of emergency for 30 days in the areas of Durres and Thumane, the worst affected and promised it would build new houses by the end of next year for those who lost them.