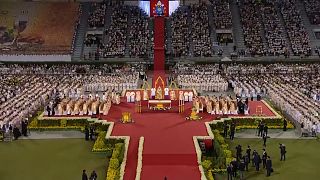 Pope slams use of women and children for prostitution in Thailand

Pope Francis condemned on Thursday the exploitation of women and children for prostitution in Thailand, which is notorious for its sex tourism, saying the violence, abuse and enslavement they suffer are evils that must be uprooted.

Francis, on the first full day of his visit to mainly Buddhist Thailand, led a Mass in Bangkok's National Stadium for tens of thousands of exuberant Roman Catholics in a country where they make up less than one per cent of the population.

"For us, it is as if God himself is here," said Nutaporn Kwanmuang, 27, who attended the Mass, the largest gathering of Catholics since Pope John Paul II visited in 1984. Tens of thousands of others watched on screens in an adjacent stadium.

In his homily, Francis mentioned the exploitation of women and children and the plight of refugees and migrants for the second time in one day.

"Here I think of children and women who are victims of prostitution and human trafficking, humiliated in their essential human dignity," said the 82-year-old pope, who looked tired at the end of a long day.

Thailand, which attracts some 35 million tourists a year, has sought to shed its reputation for sex tourism. But repeated crackdowns have not rid Bangkok and other tourist hubs of go-go bars and massage parlours that often offer sex.