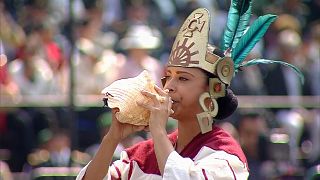 The parade marked the country's 1910 revolution.

Actors dressed as important figures of the revolution acted out specific events.

The Mexican Revolution was a period of political, social and military turmoil which began on November 20, 1910, and saw peasant armies led by Emiliano Zapata and Pancho Villa, among others, topple the dictatorship of Porfirio Diaz.

The revolution's original aim was to install democracy and improve life for the country's landless peasants but it degenerated into a factional war over power that lasted until 1920.

However, many historians consider the Mexican constitution of 1917 the official ending of the Mexican Revolution.

Once the fighting stopped, rather than democracy, it set the stage for 71 years of political domination by the Revolutionary Institutional Party that ended in 2000.