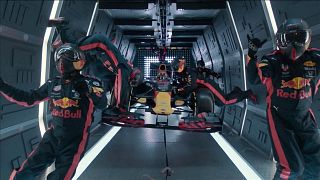 F1 team realises the challenge of changing tyres in weightlessness

The Red Bull Formula One team took a pit stop to new levels by performing the task in the weightless conditions of Zero-G in the skies over Russia recently.

The Red Bull team broke their own world record for a pit stop with a time of 1.82 seconds for changing Max Verstappen's tyres at the Brazilian Grand Prix last Sunday (November 17), but this space-age challenge involved using an Ilyushin Il-76 MDK cosmonaut training aircraft at the Yuri Gagarin Cosmonaut Training Centre in Star City.

The 16 pit crew members took a crash course in cosmonaut training in preparation for multiple Zero-G flights in the aircraft's fuselage along with the 2005 RB1 F1 car and a 10-strong film crew.

Each flight consisted of a series of parabolas, with the aircraft climbing at a 45-degree angle, then falling in a ballistic arc, to produce a period of near weightlessness of around 22 seconds before the next climb.

The F1 car and equipment had to be carefully secured before and after each weightless period - because no one wants gravity returning when a 400-kg car, the tyres or the pit crew are a metre or so off the deck.

Each filming take was around 15 seconds and provided the most physically and technically demanding activity the live demo team has ever undertaken.

Putting their bodies through the strains of Zero-G certainly left the pit crew with a whole new level of respect for their newfound cosmonaut colleagues.

"First flight, wow, I don't know if to laugh or cry," said Support Team coordinator Mark Willis. "The first parabolic flight took us all by surprise. We were all in the ceiling straight away. It was incredible. No control. Couldn't do anything. As the flight went on and you understood a little bit more what to do and how to hold on, where to push and to pull, it got easier."

The Red Bull team will be performing more down-to-earth manoeuvres at the Abu Dhabi Grand Prix, the final race of the season, on December 1.