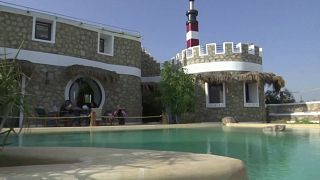 Taymour El-Hadidi grew increasingly wary of Cairo's clustered buildings and its alternatives in gated communities around the capital, so he brought to reality a dream of his own -- a house made entirely from recycled material.

When he first started the project four years ago, Hadidi did not envisage how the building would look like. Now, the two-storey exquisite installation in the greater Cairo city of Sheikh Zayed stands witness to years of hard work and innovation.

Specialised in business administration, Hadidi had no professional background in engineering or construction. He only wanted to implement his environmentally friendly idea when he started looking for a house following his marriage in 2012.

Unable to find a suitable home, he gathered a small team of creative workers including builders, electricians, carpenters and painters, who helped him make his dream come true on a piece of land he owns.

He collected discarded concrete blocks, red bricks and glass bottles to build the house walls, ceiling, and even beds. A recycled loader tyre that he turned into a window stands out as a centrepiece in his house.

The building material was almost for free, but the bills for skilled craftsmanship had cost him nearly two million Egyptian pounds ($124,000), he said.

He hoped that young Egyptians struggling to find suitable housing would follow in his footsteps.

Egypt's government plans to pour tens of thousands of new housing units onto the market in each of the next few years, in a bid to reduce crowding in Egypt's congested cities and provide homes for the poor.

But many analysts say the new residences are priced way beyond the means of most Egyptians and a good share of them will remain unsold.

The government is undeterred, however, and moving full steam ahead on a new capital city 50 km east of Cairo, a project that will be designed to deliver 240,000 new housing units over the next five years.