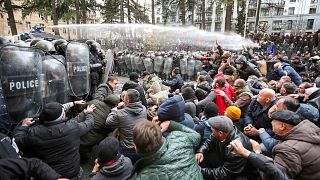 Georgia: Police clash with protesters in front of Parliament

Police in riot gear attempted to push thousands of demonstrators away from the parliament building in the Georgian capital, as the second day of sizable protests simmered over the failure of promised electoral reforms.

Officers in black helmets and riot shields advanced down Rustaveli Prospekt, Tbilisi's main avenue, on Monday while others jostled with demonstrators who have been trying to storm into the parliament.

The protests were sparked by last week's parliamentary vote in which a draft constitutional amendment to change national elections for all parliament seats to proportional representation failed to pass.

The change had been promised by the governing Georgian Dream party in the wake of massive demonstrations in June.