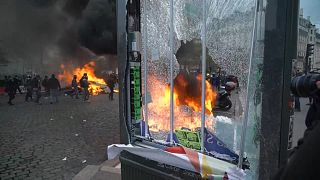 'Yellow vests' back on the streets to mark movement's anniversary

France's "yellow vest" ("gilets jaunes") protesters were back out on the streets on Saturday - a year after their first demonstration.

Rubbish bins and cars were set on fire, while police fired tear gas.

The movement began in November 2018 amid anger over an increase in fuel taxes but snowballed into a general anti-government protest.

Macron backed down on the fuel tax and offered €10 billion in measures to address protesters' concerns.