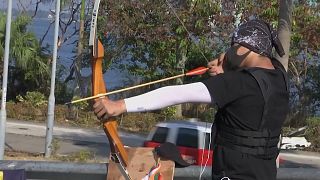 They built concrete walls and watchtowers and had weapons that included bows and arrows, catapults and hundreds of petrol bombs.

The idea is to stop police from raiding the facilities.

It is the latest development in anti-government protests in the city-state, which are now into their sixth month.

The territory has been embroiled in a week of violence after an officer shot a protester, a protester set a man on fire and a third man died after reportedly being hit on the head by a brick.