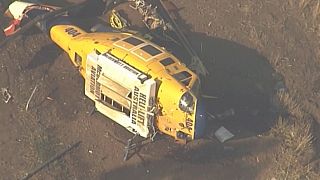 A water-bombing helicopter crashed in Australia as it was being used to battle a forest fire west of Brisbane.

The pilot escaped with minor injuries, according to Queensland Fire and Emergency Services.

Officials on Wednesday ordered people to leave areas in the path of fast-approaching flames, as wildfires rage on the east and west coasts of the country.

While cooler weather overnight brought some relief for firefighters in New South Wales, attention shifted to its northern neighbour, Queensland, where more than 80 fires threatened lives and homes.

Authorities issued a "leave immediately" warning, the highest level, for several areas, including around Pechey, where the helicopter came down.

Across the country, in Western Australia, officials were responding to two emergency bushfires that had destroyed two homes and damaged another. Bushfires are common in Australia's hot, dry summers, but the ferocity and early arrival of the fires in the southern spring this year has caught many by surprise. There is unlikely to be a near-term respite from hot and dry conditions.