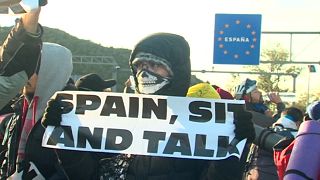 Police face off against protesters on France-Spain border

Police have clashed with Catalan pro-independence demonstrators who had blocked a major road link connecting France and Spain for nearly 24 hours.

Police on the French side of the border at La Jonquera pushed protesters to the Spanish side, removing debris from the AP-7 highway, a major route on the border that had been blocked in both directions.

The protest was organised by a clandestine activist group called Tsunami Democratic, which has staged many protests, some violent, since a dozen Catalan separatist leaders were convicted last month for their role in a push to make Catalonia independent from Spain in 2017.