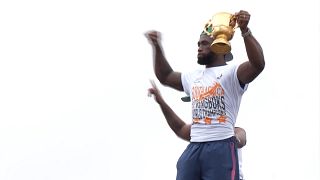 The captain of South Africa's national rugby team returned with his teammates to his hometown after winning the World Cup in Japan.

Siya Kolisi is the first black captain of the national rugby team, known as the Springboks.

In South Africa, where apartheid was in place until the early 1990s, the national rugby team used to be made up mostly of white players.

On Sunday, the Springboks visited Port Elizabeth -- Kolisi's hometown -- as part of a victory tour of the country.

The players were greeted by an exuberant crowd. Supporters cheered when he raised the Webb Ellis Cup while standing on top a double-decker bus.

The team is touring South Africa after winning 32-12 over England.