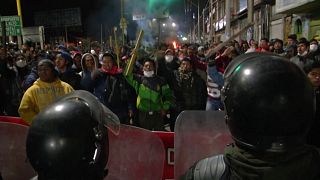 Clashes erupt across Bolivia amid unrest over election result

Supporters of Bolivian president Evo Morales have been involved in violent clashes with supporters of rival presidential candidates in the city of Cochabamba.

Firing sticks of dynamite and hurling rocks, the Morales supporters kept their rivals at bay under the watchful eye of the police.

In La Paz, anti-Morales protesters taunted the president by offering a letter of resignation and promised to continue their action until he leaves government.

"We are here marching against the biggest fraud," said protester Fared Paredes who marched peacefully through the streets with others.

Opponents challenge the official result of October 20 elections that showed Morales winning by a margin big enough to avoid the need for a runoff against a united opposition.