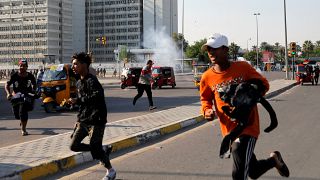 Iraqi security forces break up protests in Battle of the Bridges

Iraqi security forces fired tear gas and live rounds into the air to disperse protesters in central Baghdad on Wednesday (November 6) as the biggest wave of anti-government demonstrations in decades spread out across the capital.

Reuters correspondents said the shootings took place on or near three of Baghdad's main bridges —Ahrar, Shuhada, and Bab al-Muatham — which have become focal points of the protests.

Protesters had blocked the Shuhada Bridge over the River Tigris since Tuesday afternoon (November 5) as part of efforts to bring the country to a standstill, with thousands joining anti-government demonstrations in the capital and southern provinces. They had tried to take Ahrar Bridge on Monday (November 4) when security forces opened fire, killing at least five.

More than 260 Iraqis have been killed in demonstrations since the start of October against a political class they see as corrupt and beholden to foreign interests.