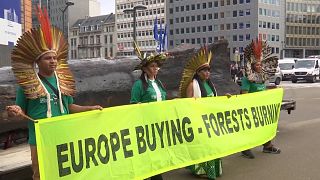 A group of Brazilian indigenous people burned a tree and held banners outside the European Council in Brussels on Tuesday in a protest against fires in the Amazon forest.

Protesters' banners included one with a photo of Paulo Paulino Guajajara, killed by illegal loggers in a deadly ambush late Friday in Brazil's Maranhao state.

Concern about the rainforest has heightened after Brazilian President Jair Bolsonaro took office this year with calls to loosen protections for nature reserves and indigenous lands.

Fires used to clear land in the Amazon increased sharply in July and August, causing international alarm over a region seen as critical to curbing climate change.

Bolsonaro has said economic development was necessary for the Amazon.

Celia Vakriaba, a Brazilian forest activist and land defender from the ecoregion of Cerrado, said protesters were highlighting the damage done to their livelihoods and to a vast swathe of Brazil's ecosystems and calling for action.

"(The fires) have a direct influence because a fire that burns the Amazon, in reality, does a lot more damage to the Cerrado (tropical savanna region of Brazil), 55 percent of the Brazilian territory and burns a lot more that the Amazon territory," Vakriaba said, adding "we would have wanted to come here for other reasons but sadly what brings us here is because capitalism is killing us."