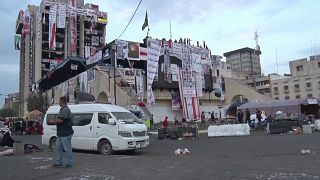 Thousands of anti-government protesters spent the night camping in central Baghdad on Monday (November 4), with more gathering near Tahrir Square in defiance of the prime minister's plea to end protests which he says are costing Iraq's economy billions of dollars and disrupting daily life.

The protests have broken nearly two years of relative stability in Iraq since they started on October 1. More than 250 people have been killed.

Despite the country's oil wealth, many people live in poverty with limited access to clean water, electricity, healthcare or education.

Prime Minister Adel Abdul Mahdi appealed to protesters on Sunday night (November 3) to suspend their movement which he said had achieved its goals and was hurting the economy.

The premier has said he is willing to resign if politicians agree on a replacement and promised a number of reforms, but protesters say that is not enough and that the entire political class needs to go.