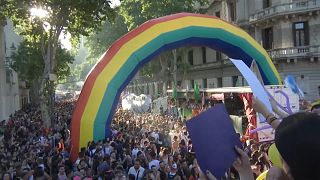 Thousands marched in the Argentinian capital as part of the city's Gay Pride parade.

Participants held flags and danced as they made their way through downtown Buenos Aires, calling for equal rights, acceptance and tolerance.

The 2019 march aims "for a country without state-promoted and religious violence," organisers said, as well as end to hate crimes.

In 2010, Argentina became the first country in Latin America to legalise gay marriage.

In 2012, the country became a world leader in transgender rights in 2012 when it gave people the freedom to change their legal and physical gender identity simply because they want to, without having to undergo judicial, psychiatric and medical procedures beforehand.

The few other nations that allow such a change often have many requirements, from an actual sex change to court orders.