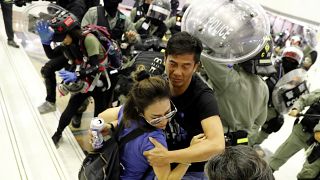 Tensions flared after anti-government protesters damaged MTR station in Sha Tin. Riot police stormed into the New Town Plaza and pointed crowd control weapons towards the protesters and shoppers inside the mall linked to the station.

Protesters were seen wrestled by riot police officers to the ground, while others were taken away for questioning.

Anti-government protesters in Hong Kong, which returned to Chinese rule in 1997, turned parts of the main island into battlegrounds on November 2, furious at Communist Party leaders in Beijing and perceived Chinese meddling with Hong Kong's freedoms, a charge China denies.