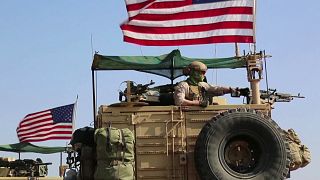 The convoy was seen one day before joint Turkish-Russian patrols are set to begin at a depth of 10 km (6.2 miles) inside northern Syria.

The joint patrols are to run from the Euphrates River east to the Iraqi border, except for the Kurdish-controlled city of Qamishli.

Qamisli is on the Syrian-Turkish border.

President Donald Trump announced earlier this month that US forces would withdraw from northeastern Syria, where the United States had allied with the Syrian Democratic Forces (SDF) to oust the so-called Islamic State (IS) group.

A military source from the Kurdish-led Syrian Democratic Forces (SDF) described the movement as a patrol running between the towns of Rmeilan to Qahtaniyah, 20 km (12 miles) to the west. The source said it would "not be a one-time" event.

Russian armoured vehicles and drones patrolled an area in northeastern Syria, ahead of joint patrols with Turkey which are expected to get underway on Friday.

Turkish President Recep Tayyip Erdogan said on Wednesday that the Turkish-Russian patrols will begin on Friday in northeastern Syria, following a Russian-brokered cease-fire that promised to have Syrian Kurdish forces withdraw to the south.